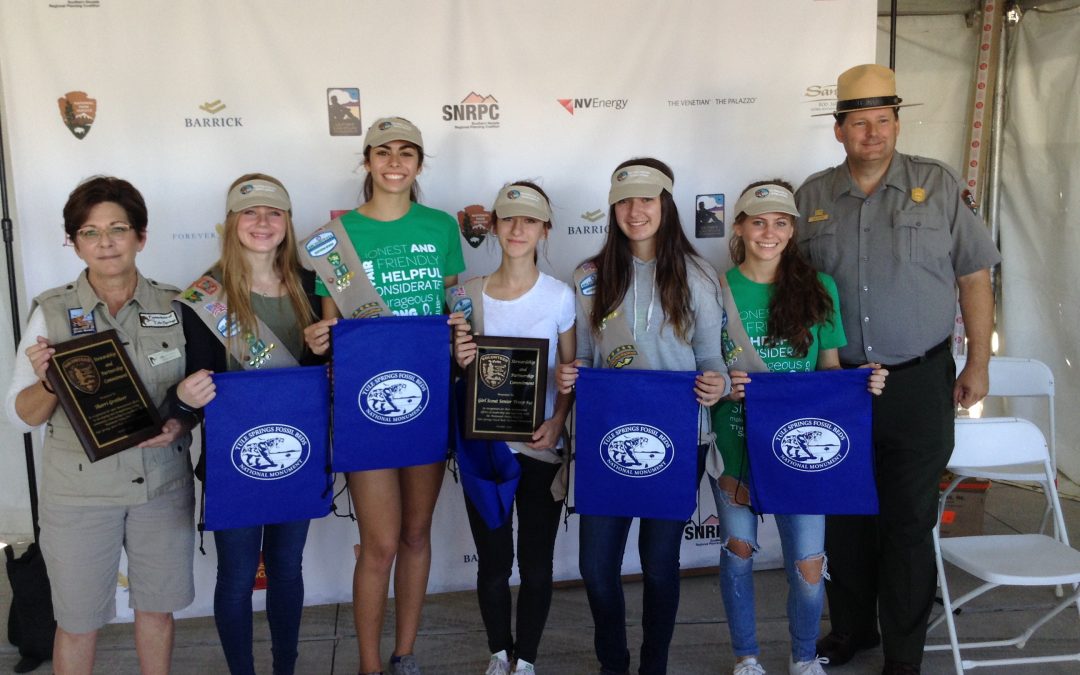 On Saturday October 15th, Lorenzi Park was filled with families ready to explore the great outdoors as part of Get Outdoors Nevada Day, the 3rd annual outdoor event presented by the Outside Las Vegas Foundation, this year in partnership with the City of Las Vegas and National Park Service.

As part of the festivities, Get Outdoors Nevada recognized several volunteers and organizations that have made significant commitments to national parks and recreation areas in the greater Las Vegas area. The National Park Service Volunteer Stewardship and Partnership Commitment award was presented to Sherri Grotheer and local Girl Scouts Troop 41.

Grotheer has served on the Protectors of Tule Springs (POTS) board of directors since 2012 as director of fundraising for POTS.  Last year, she created the Mammoth Penny Push campaign which reached Clark County School District students with information on the Tule Springs Fossil Beds National Monument and raised more than $35,000 to benefit the National Park Service (NPS). POTS provided NPS with a new trailer to support clean-up efforts at the Monument and Superintendent Jon Burpee is working on a wish list of other needs for the remaining funds. The Mammoth Penny Push campaign will run again in spring 2017.

“It’s humbling to be honored in this way because so many people were part of this and because working with Clark County’s school children really was a dream come true for me, personally, and for Protectors,” said the visibly touched Grotheer after accepting the award in front of a few hundred event attendees. “I became passionate about Tule Springs because of its potential to bring a different kind of learning experience. That passion makes it easy and fulfilling to put in the time and effort to make that happen. Working with the Girl Scouts, and the project’s many supporters and sponsors, was a joy and I made many new friends along the way.”

POTS works closely with Girl Scout Troop 41 who were also honored for their work on various educational and fundraising activities for the National Monument. The troop created a promotional video for the Mammoth Penny Push campaign and manages several social media accounts promoting the Monument.

Dani Mason, a 10th-grader that has been part of Girl Scout Troop 41 for five years, chose the Monument as the subject of her gold award project. Her project is to help supply Tule Springs with the financial support required to establish it as a secure resource in the community due to its invaluable paleontological treasures. She plans to target private businesses and organizations in the Las Vegas community and to develop a list of possible grants that could serve as a sustainable source of funding for Tule Springs.

Mason explains, “Tule Springs is a vital resource and has the potential to be an important center for education and recreation in southern Nevada.  To make that dream come true, Tule Springs needs public support and I want to help them raise awareness and find supporters in our community.”

POTS also had an exhibit at the event, with fossil displays of Ice Age animals, history of the area and information on future development of the National Monument. Volunteers from Girl Scouts Troop 41 helped children who attended to create Happy Birthday cards for the NPS, in celebration of their 100-year anniversary.

NPS Superintendent Jon Burpee praised the efforts of POTS and Troop 41, saying, “The passion these two groups have for Tule Springs Fossil Beds National Monument is overwhelming. They have inspired us and continue to do so. We look forward to our continued partnership.”